And fighting time so hard I pray
that this moment lasts forever.
and will the world stay standing still at least for me. 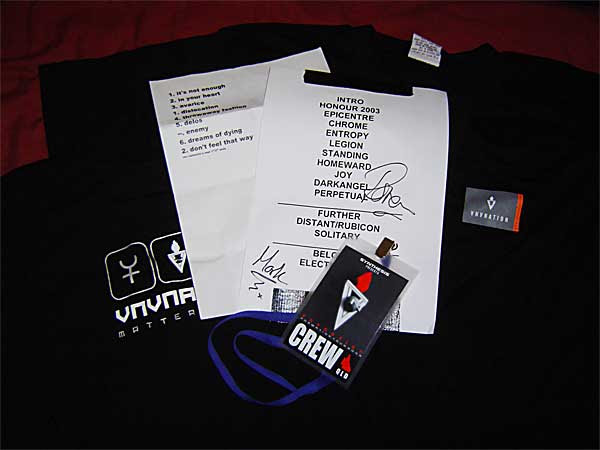 Anyone in Sydney or Melbourne who hasn't got tickets for VNV Nation yet, get up right now, RIGHT NOW, and go and get tickets (you better not still be reading - move!).

VNV Nation rocked the fuck out of Brisbane last night. You hear people talk about "intimate gigs" and most of the time it's bullshit. Last night was the real thing. The band were close enough to make eye contact and the crowd was utterly enthused. The band and the crowd bounced off each other the entire show with some of the best energy I've ever seen at a gig.

By VNV's standards it must have been a small gig, only a couple of hundred people; but Ronan and Mark certainly seemed to enjoy themselves. I've rarely been at a gig where the band had bigger grins than the fans :)

L and I got there late after a pre-gig food disaster (damn you, poorly stored nightowl cheese!) requiring a last-minute takeaway mission. Danced for half of the last song in Tycho Brahe's set - damn! Will have to catch them tonight at Ric's :)

Slid, sqeaked and creaked my way to the gig in my new shiny pants (black with a double white stripe up the sides). Never worn PVC pants before, but even drunk people in the street were telling me how good they looked so yay! ;) L looked fabulous in her new clothes (slashed neckline top and a rivetted, strappy, zipped, clippy industrial skirt [i think that's a fair description, btw :)]). Forgot to get Angus to take a shot of me/everyone though. Oh well :)

Mental note: I really must remember to scan my tickets before I go to the next gig. Seems you don't get to keep tickets anymore - the door staff just take the whole ticket, rather than ripping off the end and giving you the stub. Anyway.

Many many old faces in the crowd, many hugs and lots of yells of "you're here!?!". Secured tshirts shortly after arrival (big thanks goes out to Amaya for keeping them behind the desk so people didn't have to carry them around all night). Much joy amongst the girls when they discovered the best design was printed on the girlie sized shirts, apparently this is unusual. In any case I got one of both designs for myself (yay for being a skinny bastard who fits into the girlie sized shirts ;)) and L got a girlie tee.

Novakill worried me by being rather good. The fabric of reality was thin - a gig where both support bands were good? I must be dreaming. Plus Novakill's singer gets the "best tshirt ever" award for his BIG FAT CUNT shirt.

Things moved quickly and before we knew it, the lights dimmed and VNV's intro started. Everyone found their space and threw themselves into the gig. Within a couple of songs Ronan paused to comment you're an eager bunch, aren't you! and Mark enjoyed himself way too much goading the crowd into getting their arms in the air.

While my wish of seeing Fearless wasn't destined to come true last night, we certainly can't complain about a 16-song set including two encores. Had to laugh when I noticed Ken & Georgina from Tycho more or less conducting the crowd from the wings during the calls for encore. Meanwhile Andy (from Tycho) and I are leaping around up front, Andy remembering halfway that he had a Tycho setlist for me :)

A metric shitload of crowd interaction, chats and shake hands with the people up front... ahhhh what can I say? Last night's show was something special. Plus the band said they'd had so much fun they had to come back and do it again. GLEE!

At the end of the set, the band announced they'd be doing a signing and meet the fans... a scramble ensued as people tried to find things to get signed :) By this stage L and I were fading (damn my poor health and L's massive workload this week) and I was becoming resigned to having to leave without autographs. Then a gleefull Georgina ran up and asked whether a signed setlist sounded good. I managed to get a "yes" out and next thing I know Ken is handing me.....: 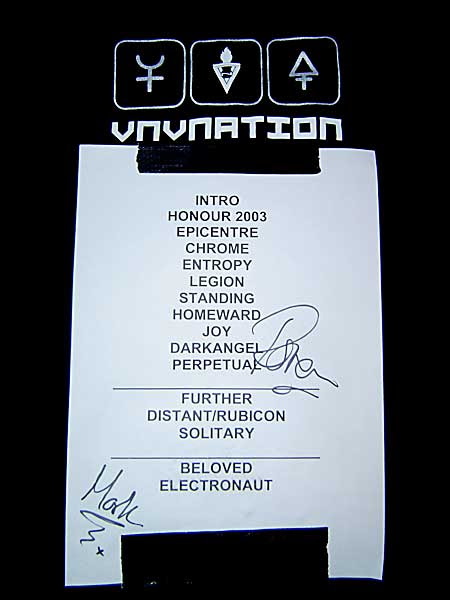 Call me a happy fan. I couldn't quite believe it :) Then to really cap it off, as I was leaving someone ran up to me and thrust "a present" into my hands. Turns out one of the crew had dumped their pass and a quick thinker had nabbed it! So although I didn't get to chat with the band, I certainly got some fantastic mementos :)

Crawled out of bed this morning to take L to work. Very glad I booked rec leave, a great pity L couldn't get out of work. I'm certainly paying the price today for all the bouncing around last night, but shit - it was worth it :)

What a great show. What a sore knee the next morning. I'm getting old.

The last show I saw at the Arena was when The Creatures came to town. The contrast in terms of performance could not be more striking. VNV were here to give a show; Siouxsie was here to be a bloody poseur. Budgie was cool though.