So, how to describe seeing The Cure play at the Opera House? 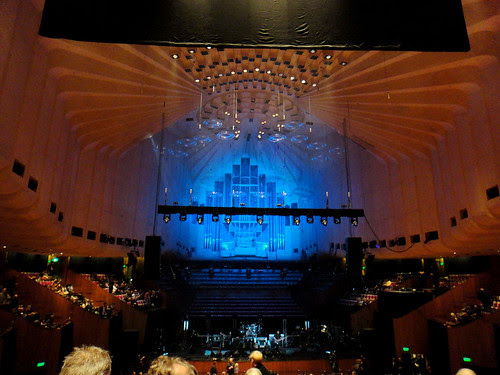 Epic. Truly. This was the encore: 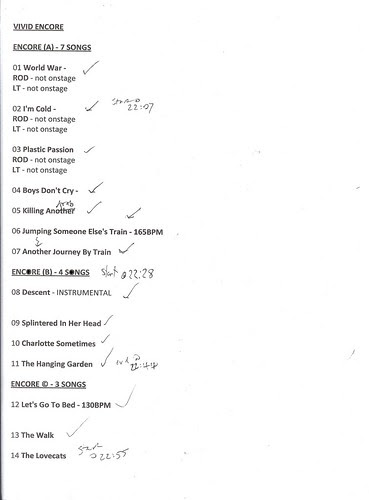 That's what we got after they'd played Three Imaginary Boys, Seventeen Seconds and Faith in their entirety. Here's the full setlist:

Rewind, I thought I wasn't going to see this gig at all. In an effort to get tickets I had a coordinated attack planned with c41. We were both hitting the website when it opened - Pete even got tickets allocated before the system crashed, leaving us both without successful purchases.

He emailed the Opera House in the hope the seats hadn't been reallocated, but we didn't really think anything would come it. But a few days later they rang up, apologised and sold him two other tickets!

Part of me had irrational fears that it was some outlandishly implausible, complex scalping scam ;) But cut to the evening and there was my real, actual ticket:

So could a gig be as good as my ridiculously built-up expectations? It was... brilliant, sublime, impressive. The sound and sheer musicianship blew me away. I'd never been close enough at a gig to truly appreciate all the crazy guitar tricks and interplay on the stage. Those boys can play.

It was a show laden with associations - so many tracks that triggered memories of one kind or another. It really drove home the fact I've been listening to The Cure for quite a long time now - across many stages of my life. High school, uni, moving out of home, moving our lives to a new city... throughout it all I've listened to The Cure. Perhaps this is stupidly prosaic, obvious, everyone has a band like this. But it's fairly rare to have it played out live on stage.

My big sister showed me the Love Cats film clip when I was a kid - she knew I'd love the madness of it. So in one of those little twists, the show finished with the first Cure song I ever knew.

I played 17 Seconds endlessly while studying; and first listened to Faith off my flatmate's vinyl copy when I first moved out of home (the warmth of vinyl really works with all the big bass and drums).

I knew many of the early tracks and b-sides from swapping tapes with friends at high school. I think my first Cure tape had Entreat on one side and Head on the Door on the other; and many more followed. To this day I still expect a skip during Boys Don't Cry, where the original vinyl had stumbled while being dubbed to tape.

At college I sat up late with friends many times, talking and watching videos - usually finishing with Staring At The Sea. The gig included something like thirteen songs from that video alone, calling to mind good company, a bottle of scotch and a night that needn't end early.

So it wasn't just an incredible gig, it was an amazing reminder of the years I'd spent listening to the music.

Four hours, and the show felt like it was over too damn fast :) I can't wait for the DVD to come out, it begs a night with friends and the kind of single malt we couldn't dream of affording back at college.