Yeah this was a non-link post. Whatever. You'll cope I'm sure.

my name is anikin skywalker...

Why you can't hear Jet on an iPod - radar.smh.com.au. Very brief article pointing out how stupid it is to allow the sale of iPods in Australia when it's basically illegal to use them for the purpose they're promoted for.

they're threatening us with relocation

It's extremely unusual for a band on Rove Live to catch my attention. Actually they're mostly total shite. But The Cat Empire really grabbed me. Must grab their album when I have the money. In the meantime they're giving away the mp3 of the song they played. Reminds me a little of Supergroove, although lighter.

Also; their site is an example of Flash done well... at least in terms of usability and design.

Slashdot | L.A. County Bans Use Of "Master/Slave" Term. It's an established technical term. It's stupid to try to roll it back. It won't change anyone's life, no really it won't. All this Political Correctness bullshit accomplishes is to take attention and energy away from the real issues.

Credit to colinmo for posting some of these already.

via an lj via a friend's webpage. blogs and journals make such random connections.

Dilbert Comic Strip Archive - 2003.11.22. As usual, it'd be funnier if it didn't accurately describe so many workplaces.

BLOGGER - Knowledge Base - What to do if your Mom discovers your blog...

quote of the day

Wired 11.12: View - I'm a Maverick, Not a Mogul!. Q: Are you concerned about piracy in movie theaters? A: Not one bit. If we can't compete with some guy sneaking a camera into the theater, or a blurry, encoded, postage stamp-sized file, then please - just shoot us.

Saw this last night - Pirates of the Caribbean: The Curse of the Black Pearl (2003). LOVED IT. Will probably be seeing it again and will be purchasing the DVD. Too much fun.

photo matt » How To Create A Favicon...on windows, for free.

Down the Rabbit Hole. I have a mixed reaction to this... party thinking it's pretty cool, partly thinking these people have waaaaay too much time on their hands.

slowing down the progress of darwinism

Gossip...What people were overheard saying on the London Underground

Mac Eye for the Windows Guy

Resistible lure of the lucre - six figures is enough for most - www.smh.com.au

Nanotechnology could make lanterns out of flickering fluoro - www.smh.com.au

Australian IT - ISP staff named in MP3 case (Kate Mackenzie, NOVEMBER 14, 2003). Next up, bus drivers to be jailed for the drugs that kid on the back seat had in his bag.

DOSBox, a x86 emulator with DOS

...and we thought they weren't coming to the party...

that other football series

FOX SPORTS | League | Lockyer's Ashes euphoria (November 17, 2003). I wish they'd rebroadcast these matches at a more reasonable time. 4am is a bit much.

But seriously, folks. Most people don't even know what the term "web developer" entails; but they're pretty sure they can do it themselves (after all, their ten-year-old has their own website - how hard can it be?). As someone observes in this forum; web development has reached the same approximate level of maturity that "desktop publishing" reached in the 80s. Any dick with a computer can go into business and claim they're a "web developer"... and, yes, they will get something onto your server which can be viewed in a browser.

To quote Ted Nelson: [The web] is trivially simple - massively successful and it's like karaoke - anybody can do it. It's so true it hurts. So, how good do you really think most people are with the karaoke mic?

Problem is that while most people can spot a truly terrible karaoke singer; they can't tell a good website from a crap website. Even worse, they don't know how to spot a real professional over a total cowboy; so they can't vet the people they have to trust on the question of quality web. Then the industry itself doesn't have a recognisable accreditation system nor any major professional associations.

good while you wait for your mail servers to come up

tell me you don't search with msn

Why Microsoft wants to buy - then trash - Google: The mind boggles at the amount of fear that Microsoft has that people who search the Internet for knowledge, answers and understanding. Microsoft's fear is so great that it is willing to subvert what is truly one of the great inventions of history, searching the Internet, to a mere tool with one purpose, namely, to trick us all into buying Microsoft's software.

Insomniac Games | Ratchet & Clank 2 - screenshots. Sweeeet. Out soon, so soon.. (nov 30 in australia). must roll innocent bystander for money to buy it....

i don't update for a few days and people notice? This is quite strange ;)

Never fear. I am alive and mostly well (brain-fried from training course; hurt my wrist; but ok really). Regular stream of drivel will recommence shortly.

Which Black Books Character Are You?

My life is rated R.
What is your life rated?

I'm not surprised, but I suspect some people would be.

Ahh yes. Read QDB and skip the actual IRC. It's the best way to go.

the law is an ass

oo-er, the hiltons are pissy

NEWS.com.au | Entertainment | Hiltons' Cup exposure (November 05, 2003) - more on the Roy and H.G. interview; plus a suitably harsh take on Paris Hilton's dress style. Also finally an explanation for all the attention on the sisters - [the Hilton sisters were] paid a handsome appearance fee by the Seven Network to be the face of the Cup.

Basically they want to be adored and can't understand any kind of self-deprecating humour. Why their minders allowed them to go on The Cream is beyond me.

Roy & H.G., take a bow. The Cream had me in stitches. Between the Aussie Haka and the "how fucking dumb are the Hiltons" segment I couldn't stop laughing. Well ok, it was supposed to be an interview with the Hiltons... but let's face it - nobody was home.

Dreamless - Best Clients Quotes - 977desisgn.com. Funny, in that "it's not really funny because it's true" way.

The Register | BOFH and the government contract. The Bastard gives the correct answer to an ink blot test. Amongst other things. Much hilarity.

Salon.com Technology | Hackers on Atkins: [W]hile there's nothing particularly bleeding-edge about eating the hamburger but not the bun, now that low-carb dieting has gone mainstream, the diet does appear to hold a special attraction for hackers, programmers and other close-to-the-machine dwellers. For some geeks, the low-carb diet is itself a clever hack, a sneaky algorithm for getting the body to do what you want it to do, a way of reprogramming yourself.

Dieting seen as a hack... yeah, that does make sense.

Would just like to say that Strange was great fun on Saturday. It's been a while since the sun beat me home :) But then, $5 for two drinks will do that. Not to mention friends over from the UK for a visit. 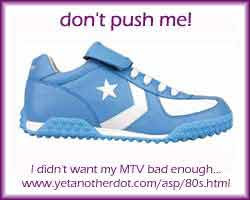 I assume it was out of 100. I'm glad I didn't get any higher than that :) I got approximately equal amounts of questions noted as "everyone gets this wrong" and "how the hell did you miss that one?". Probably helps to know your Clash properly and find hair metal amusing.

Update: if that wasn't enough nostalgia for you, check out http://www.80stees.com/

CNN.com - Girls pummel man who exposed himself - Oct. 31, 2003: PHILADELPHIA, Pennsylvania (Reuters) -- A man described by authorities as a known sexual predator was chased through the streets of South Philadelphia by an angry crowd of Catholic high school girls, who kicked and punched him after he was tackled by neighbors, police said Friday.