Back in December, we had a grand weekend'o'gigs. Forgot to blog it at the time, so here it is...

Thanks to crappy print at home ticketing, I had no ticket in my pocket at the gig. That annoys me as I like tickets as mementos of gigs, even if I can only ultimately keep a scan as the crumpled, ripped and sweaty original fades to nothing.

After the show, That 1 Guy (Mike Silverman) was chatting with fans and signing autographs (actually Mr Percival was too but I didn't get a chance to say hi to him before we took off).

I already own everything That 1 Guy's released so really just went over to say the gig had been awesome as usual (fourth time we've seen him)... but he does card tricks during the show and a few were lying around on the stage.

I asked &quot;any chance you could sign one of those for me?&quot; and lo and behold he drew the ace of clubs. 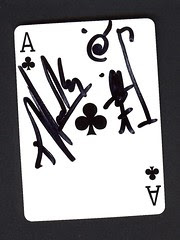 The support artist, Mr Percival, was an unexpected bonus - we hadn't seen his show so didn't know what to expect. Turns out, he's absolutely fantastic. What other artist could get a Sydney crowd singing?

The place was packed and hot as hell, so we ended up missing most of the support acts. We were outside trying to decypher the running sheet - reaching the conclusion the running sheet had gone out the window hours earlier - when I said "you know that sounds like a Horton Heat song..." and yep it was!

We were lucky getting a good spot up behind the Metro's sound desk - I guess most people were keen to get down into the standing area, but anyway it meant we could see just fine. Given TRHH were the loudest three piece I've ever encountered it's not like we couldn't hear either ;)

You know if there's a double bass, someone has to ride that sucker... and don't miss the over-the-head throw of the bass at the end: YouTube - Reverend Horton Heat-Devil's Chasing Me~Live sydney 2010.

Then the drummer cut loose with an absolute face melter of a solo... cut to 2:20 if you're impatient ;)

For a similar effort, but a better video...

After the show, hundreds of happy rockabillies spilled out to confuse the hell out of the usual George Street crowd. As I said at the time...

The psychobillies are freaked out, the big red rocket has been ridden and at one point we shot a man in Reno just to watch him die... Our eardrums are somewhere in the blue mountains and george street is full of smiling rockabillies. Reverend Horton Heat.... Fuck yeah!

If you get a chance to see The Reverend Horton Heat... my advice: take it!

Dear fuck but this was a logistical nightmare. The stage was moved, turning our expensive tickets into pretty crappy seats at the far end of the stadium; and they tried to make us go get new, randomly-reassigned seats. An usher made a half-hearted attempt to enforce it before deciding he wasn't paid enough to argue with us ;)

The support act was shite - I do not understand why the fucking hell they got Jay-Z to support U2. Much less why U2 brought him on stage later on during the show to ruin Sunday Bloody Sunday.

But eventually we did get a good U2 show. The stage was incredible, really well designed to make a big show out of a big stage and lighting rig. The sound suffered the usual problems of stadium acoustics but there were some great moments.

Two standout gig moments: first, when the crowd spontaneously took over singing Still Haven't Found What I'm Looking For; and second when the crowd lept to its feet the moment U2 started playing Where The Streets Have No Name. Guess we liked the old stuff best ;)

Mix Tape? Que? Call it a playlist if you prefer, but for some reason I still think of these as mix tapes, even though no tape was involved.

This year 15 tracks made it onto the list. Here they are, purely in the order I added them.