No I don't drink soy hot chocolates, it was someone else's order. The cafe had a spare soy hot chocolate the other day (cancelled order) and gave it to me as a freebie. EEEUGH!! Tasted like chocolate in blended up pasta. I have no idea how people drink it. Apparently the only thing you should get done with soy is chai! 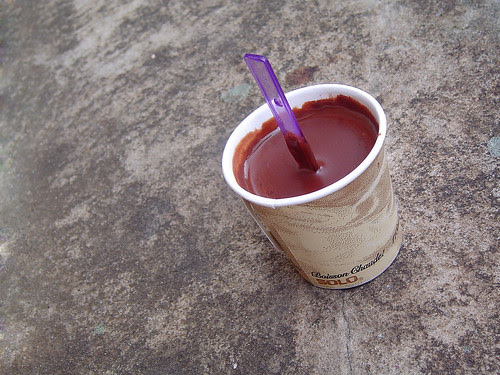 At the Aroma Festival 07, The Rocks, Sydney.

I don't know which is funnier or more wrong... the fact that McDonalds UK will be able to power its entire fleet with its own grease, or the fact they employ a Senior VP who would utter the phrase As we get better at the refinement we will be able to remove virgin rape from the process.

Yes, that's the real quote reported by Planet Ark. Apparently the guy doesn't realise that the internet exists to quote people out of context.

It doesn't even matter that he's talking about the composition of the biofuel, with is 85% waste vegetable oil and 15% virgin rapeseed oil. Some things you just shouldn't say! How do you get to be a Senior VP without learning to just say 'canola oil'?

Meanwhile they've observed that while many people say biodiesel vehicles smell like McDonald's chips, that's not the reason they're doing it. They reckon their trucks won't smell like that. Maybe they just don't want to admit that their product smells the same as vehicular waste fumes.

Remember those changes to electoral laws which make it impossible to enrol to vote after the election is called? Well Howard must be caught out here. He must want to call the election to lock out more young voters, but at the same time polls are showing he's not in a position of strength.

Young voters haven't deserted Howard, he deserted them. Frankly he deserted anyone under the age of 30 and made it clear he didn't give a shit what we thought - "fuck you, I have the grey vote" has been his overall stance. He might have thought it was trivial that Rove McManus wanted to interview him, but it made many young voters realise what a stuffy, arrogant prat he really is. He only gives time to older voters and only appears in places he feels comfortable - ie. that support him.

Howard didn't want the youth vote and it's his own dumb fault for being so short-sighted. This just shows one of the many ways he's out of touch and not fit to be PM.

No doubt he's got some plan in mind to manufacture another crisis, to scare the electorate into another glorious term of workplace terrorism and American coat-tail hanging. He's happy to change industrial relations laws even though he knew it would hurt Australians (PM 'knew WorkChoices would hurt workers' - ABC News (Australian Broadcasting Corporation)) yet he still thinks he's doing a great job: We deserve to stay in power, Howard tells party - ABC News (Australian Broadcasting Corporation): He says despite poor polling results, his party deserves to stay in power because it offers better prospects on interest rates and employment.

Really? Housing affordability is in crisis, personal debt is through the roof and if you've got a job you probably also have an AWA which fucked you over in fifteen different ways. On a global scale we've become a hated nation amongst extremists for our endless support of the reign of Dubya... something I thought our laid-back nation would never accomplish. Yet Howard got us there. Even the UN is pissed off with us. Bright future we've got going on here.

But of course, Howard falls back on his usual strategy: telling us we're wrong. Credit card debt figures are good! PM downplays credit card debt levels - ABC News (Australian Broadcasting Corporation): Prime Minister John Howard says there are some positive aspects about the latest credit card figures. ... 'Firstly, the thing is the growth has slowed and secondly, for every dollar owed there are $5 of assets.' So don't worry that you can't pay for groceries, you have assets! Don't worry that your personal debt means you might lose those assets...

Even on a personal level I think an increasing number of people find Howard repugnant. The way he has treated Costello speaks volumes. He lies, he cheats, he makes promises with no intention of keeping them and even on a simple level he can't bring himself to be polite to his Treasurer. You could describe his behavious as 'un-Australian' if Howard himself hadn't rendered that term meaningless.

So anyway. You can probably guess I won't be voting for Howard...

You are the classic Shakespearian tragedy of the lolcat universe. The sad story of a baking a cookie, succumbing to gluttony, and in turn consuming the very cookie that was to be offered. Bad grammar ensues.

Link: The Which Lolcat Are You? Test written by GumOtaku on OkCupid

(gapingvoid: cartoons drawn on the back of business cards)

Blues breach battered Maroons: NEW South Wales regained a semblance of pride in defeating Queensland in Origin III at Suncorp Stadium, winning 18-4, but the epic match will be remembered as much for the amazing courage of the Maroons.

What a match! That was just an incredible battle, there's no such thing as a "dead rubber" in State of Origin. Queensland may have lost the final game of the series but they can hold their heads high - that effort was gutsy beyond belief.

...and besides, we did still actually win the series :)