Taken during a wander around Pyrmont this afternoon. I only just had time to snap this shot before the gull flew away.

In photography communities online there's a persistent conceit about "getting it right in the camera" or "no photoshop". People often claim they like to "retain the original purity of photography".

Personally I think the argument is bollocks. Photoshop emulates the darkroom and if the darkroom could have done some of Photoshop's new tricks, you can be damn sure photographers would have used them.

Consider this photo, showing Richard Avedon's notes to a printer about preparing a portrait shot for an exhibition: 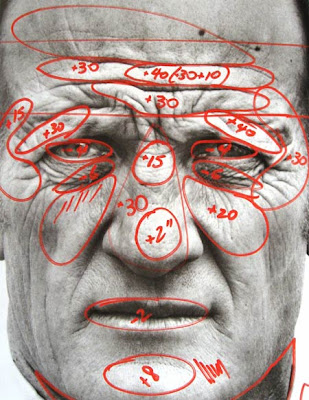 That's the reality of photography. Photographers didn't shun post-processing just because it didn't happen in the camera. They always used every available technique and all available equipment to produce the best final result.

Photoshop did not really introduce anything to the equation, it just subtracted the chemicals and the annoying fumbling with film canisters in the pitch dark.

Composite images were always an ethical dilemma. The question of whether to alert the viewer that an image is not a raw capture has nothing to do with how it was created or processed.

So if you like to "do it all in camera" for the challenge, or the personal satisfaction; then good for you - it does take skill. Just as properly post-processing an image takes skill.

But if you claim you're doing it all in camera for reasons of being pure to some "original spirit" of photography... and especially if you think it gives some sort of moral or technical superiority over those who don't... well, with respect, I think you're demonstrating an ignorance of history rather than anything else.

irrational fear
drowning out logical thoughts
i jump off the ledge

On Wednesday night I went rock climbing for the first time ever. Fun, scary, highly recommended :)

Part of the first night experience was doing the Leap Of Faith (my friends kindly built it up into a big thing ;)). It's where you climb up to a ledge, then leap off to a trapeze, then let go and a descender brings you down.

I have to admit, I just wasn't prepared for how scared I was when I stood up on the ledge. I expected to be nervous, not hind-brain scared. But I eventually managed to stop shaking, keep chalk on my hands without sweating it off, and make myself jump off.

So anyway, now I just keep thinking about the next climb :)

it can be done
but still, just because you can
doesn't mean you should

clickable raccoons
the perils of keyword links
discussion goes on

2008.04.11 (We were discussing an advertisement spot with the Optus rock'n'roll raccoons, amongst other things. Some days there's rather a lot of Random in my workplace...)

The institution finds itself caught in a paradox: aggregation makes it powerful, but takes away its voice. When power was important, the institution prospered. Now that the cultural balance is shifting toward hyperempowered individuals engaging in conversation, the institution is under threat. It is being disempowered in a way that it can not adapt to without a fundamental restructuring of its organizational behavior. This is something that governments are only slowly coming to recognize, but educators (and, in particular, educational administrators) are already well aware that their students are more empowered than the educational institutions they attend. The desynchronization between the scope of institutional power and the chaos of unconstrained and unconstrainable conversational hyperempowerment presents a challenge that will transform the institution – or kill it. 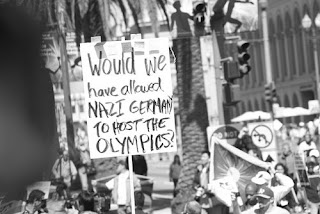