This right here is why I cannot resist State of Origin...

Then the impossible happens:

25 seconds later and I'm cheering so much dad comes back out to see what's going on.

Since then I don't think I've ever stopped watching before the final siren :)

Another choice moment: That Tackle by Gordon Tallis. It's all so over the top, it's just fantastic.

This was my favourite, I think: 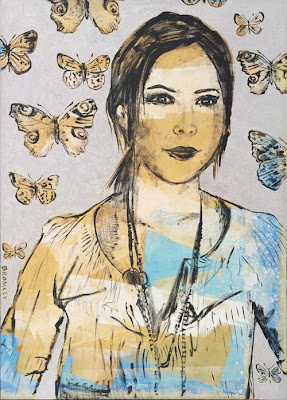 I just like the twinkle in the eyes and the personality that leaps off the painting. You can't see it in the scan but the background is silver (metallic) and the painting is as tall as me - it has presence.

I also liked these: 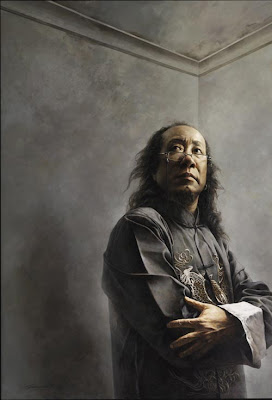 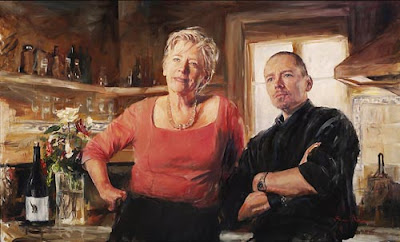 "Long Hair" is just a fantastic detail painting. The one of Red Symons captures the trademark sneer perfectly. And OK, so maybe I just like personalities of the Cook & The Chef; (the portrait is perfectly named "Simpatico").

L particularly liked this one, although the texture of the posters pasted on is lost a bit in this little image: 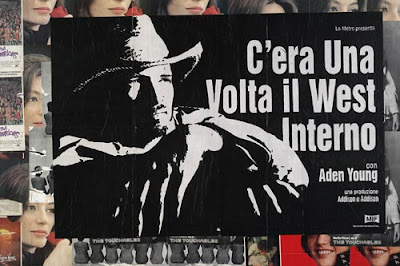 I thought the winner was crap: 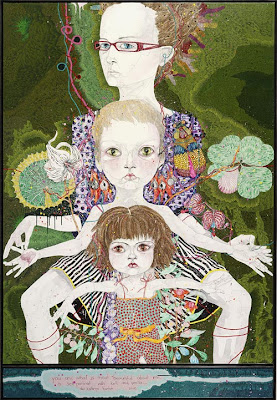 I don't really see the attraction of a painting that makes the artist's kids look like aliens. Nor do I think her kids are "some man or woman distinguished in Art, Letters, Science or Politics", which is supposedly the point of the Archibald. No doubt this painting is brilliant on some level I don't know about, but I know what I like and this isn't it :)

I think the packers got it right though, a good match of style and subject: 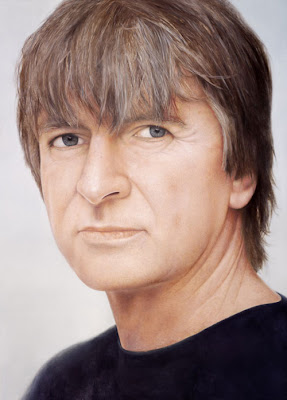 The packing room also produced the quote which went onto tshirts and coffee mugs for the exhibition... All I'll say is a lot of art teachers have a lot to answer for.

People's Choice went to the one of Heath Ledger, for pretty obvious reasons.

There were quite a few berets and dodgy hats in the room. Perhaps dodgy headwear has replaced the skivvie as the uniform of the art snob, if the supercilious facial expressions and overheard art wankery is anything to go by.

After we escaped the gallery's shop (three books, one exhibition coffee mug later), at my request we stopped off at Almost Once (aka. The Matchsticks) by Brett Whiteley. I'd never seen it up close before: 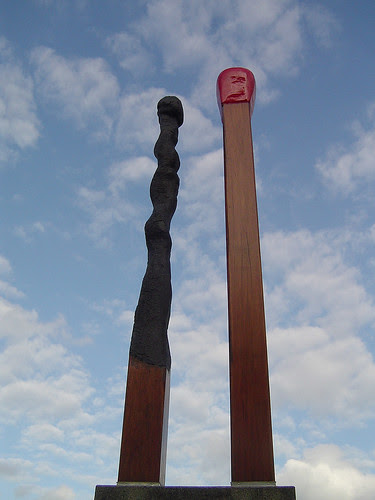 This sculpture was once of the first things that made me ponder "what is art? / is it art? / what does it mean?". I saw them on TV when I was younger and only evaluated them in terms of pure aesthetics. I then I heard of it being evaluated on entirely different terms - Capital-A Art terms. I kind of realised then there were - broadly - two ways to approach art.

Well ok I think I already knew that.

But it is the work which I remember as being the first to make a really strong impression in terms of Art vs. Aesthetics. Whiteley himself is quoted as saying Art is an argument between what a thing looks like and what it means.

...and does it matter? Or more correctly, does one position have to win? I think it's fair to say that art means whatever the viewer thinks it means AND it means whatever the artist meant... and in the end, no work's meaning can make up for poor execution; and few works can truly claim 100% aesthetic purpose without meaning. And all of that is ok. 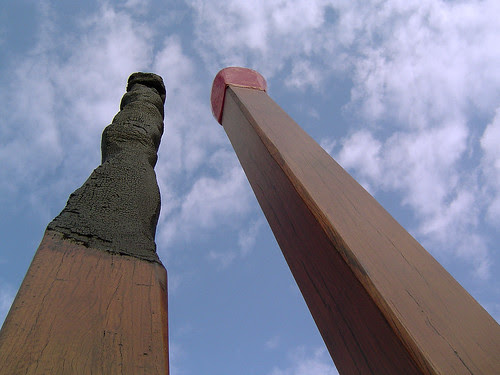 ...having now seen them in the flesh, I can still happily evaluate them more or less on the aesthetic level ;)

I don't know what Whiteley saw when he created it or when he looked at it. As with all art, it means what it means to the viewer at the time they view it.

Yes, I can see themes and ideas. I can see the pristine versus the used, purpose, the potential versus the realised, states in time, destruction, art in the detail of daily life. If you like you can draw parallels to Whiteley himself, who ultimately burnt out in front of the art world. It's all there if you want to think of it that way. On some days I do.

But the fact remains it's also two great big bits of wood made up to look like matches. One is unspoilt, varnished and the biggest red-headed match you'll ever see. The other is burnt and has a wonderful charred patina.

They look pretty cool. Pure and simple. And on some days that's entirely enough.

All hail the Lord of the Internet! Master of the Digital! King of Networking! Emperor of...

Enough of that. You scored high in every category the test registered. That means that either there's something wrong with my test (an obvious impossibility, right?) or you have an attachment to the Internet that is almost transcendent. Your results tell me that you have experience with both hardware and software, know the ins and outs of the Internet and have a range of interests that can be generously described as "broad." Of course to achieve this status, you've no doubt had to neglect other parts of your life. Ultimately, you have to ask: was it REALLY worth it?

...from which we can conclude the test actually works quite well ;)

I assume anyone reading this blog has already downloaded The Slip.

Yep, Reznor continues with the awesomeness and is giving away the latest NIN album for free. DRM-free, creative-common licensed, high quality downloads (including via torrent). Why? Well from nin.com: (thank you for your continued and loyal support over the years - this one's on me) ...and from the download page: we encourage you to remix it, share it with your friends, post it on your blog, play it on your podcast, give it to strangers, etc.

I'd have happily paid for it. It's interesting how quickly you can get used to an idea - after Ghosts I-IV (my CDs just arrived) I was looking for the 'buy' options list again :) The only thing which is slightly odd is that the artwork was supplied in a PDF, so I can't immediately use them for wallpapers or whatever (the artwork is very cool). They really got that right with Ghosts, not sure why they didn't do the same here. But hey, that's the tiniest of quibbles.

Oh and he's touring. Reckon the shows will be sold out? :)

Update: there are some wallpapers linked at echoing the sound (forum): the slip wallpapers. Don't miss the widescreen pack uploaded by ThinkICouldBurn.