Unicode Character 'SKULL AND CROSSBONES' (U 2620)[☠]. Some lubbers might 'ave ye thinkin that mean poison, but such scurvy dogs aren't to be listenin' to, me 'earties. Sure an' it means PIRATES, savvy? 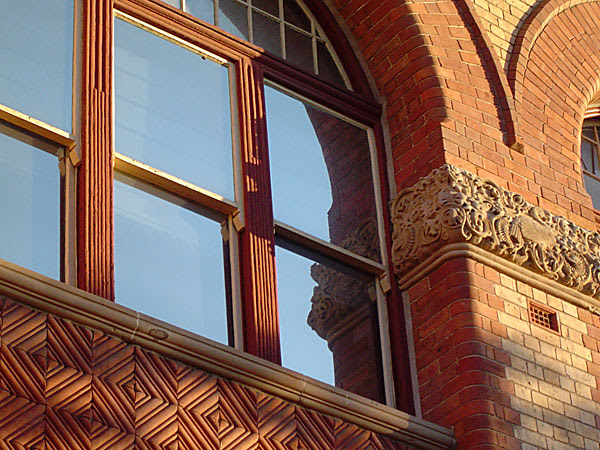 The Federal Attorney-General's office has announced the counter-terrorism legislation will now not be introduced to Parliament on Melbourne Cup day.

In relation to preventative detention orders, he says the Commonwealth has widened the category of people able to issue orders, to include retired judges and the President of the Administrative Appeals Tribunal.

Federal Attorney-General Philip Ruddock had wanted to introduce the bill next Tuesday, prompting the Opposition to suggest it was using the public's obsession with the Melbourne horse race as a way of avoiding scrutiny.

Retired judges will be able to issue these bills? WTF?! Interesting to see them back down on the Melbourne Cup Day timing... that really was a bit fucking obvious.

You scored as Industrial Goth

Congrats! you're Industrial Goth! you probably listen to Skinny Puppy or Wumpscut. you like clubbing and you cant live without technology!

You have Raven Eyes!

Your eyes are the windows to your soul. What type of eyes do you have? 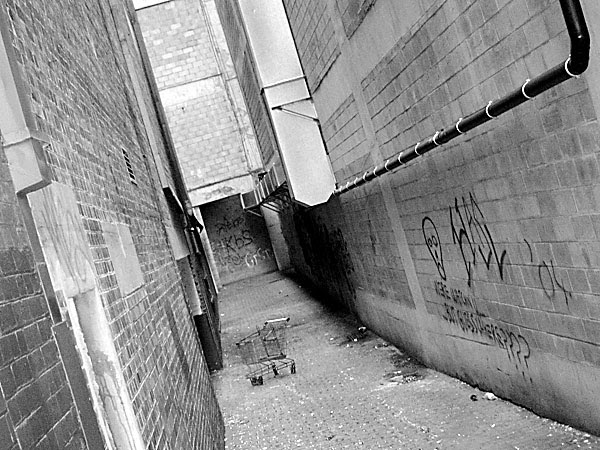 Abandoned trolley in a dirty alley. Brisbane, Australia. One of those shots where I can't decide if I like it or think it should be shitcanned.

How's this for sedition? - Opinion - theage.com.au:

The Federal Government proposes to amend the Crimes Act 1914 so as to be able to jail any body of persons, incorporated or unincorporated, which by its constitution or propaganda or otherwise, advocates or encourages the doing of any act having or purporting to have as an object the carrying out of a seditious intention.

Here's a problem with law: it's not definite, it's not specific. It's left open in order to give judges some wiggle room when applying the laws - I think the legal term is "allowing interpretation". This is why two people committing the same crime may get completely different sentences - community service versus jail time, for example.

By the cited definition of "sedition", expressing discontent with the government and encouraging people to vote against them could be deemed seditious and with that you could be placed in jail or under house arrest. Under new laws if anyone else figures out that you've been placed under house arrest and mentions it to someone in the tea room at work, they could be jailed for seven years.

So, basically, if the current government feels like it, they can jail Labour, Green and Democrat voters; since they advocate voting against the government. People are often quite strident in their opinions on the matter and could very easily be described as expressing hatred for Johnny "Lying Bastard" Howard and his minions. It's seditious to express a strong opinion that the government are a pack of arseholes who doing horriffic things to our way of life.

An extreme interpretation? Not really. Punching someone several times in the face is "assault". So is putting a hand on their shoulder. That's legal interpretation.

afl.com.au | Aussies too quick, too good: The Australians, who incredibly went into the game as underdogs, produced their greatest ever victory over Ireland, as well as kicking the highest score in the history of the competition, in recording a 2.27.7 (100) to 3.11.13 (64) over the shell-shocked visitors in front of nearly 40,000 fans at Subiaco.

iTunes hits Oz | Top stories | Breaking News 24/7 - NEWS.com.au (20-10-2005). Someone needs to remind Kathy McCabe that you're supposed to remove the superlatives and unsupportable claims before you publish a press release.

Hundreds of thousands of iPod users? Really? I know they're common, but how about some figures to back that up. A 500% increase in online sales? Compared with what? Services which nobody can even name? Based on predictions of how much money the iTunes execs expect to snort up their noses this year?

So, anyway, iTunes is finally getting released in Australia minus SonyBMG - obviously they didn't want to wait long enough to have a complete catalogue. Not that anyone should care based on the artists cited in this article (oh ok, Franz Ferdinand are pretty good).

I've just got a new work computer and have been shifted to Windows XP after years of happy Win2k use. The autorun thing shits me to tears - what a waste of time, reading an entire CD and then asking me what to do with it...just in general. Gahh!

Thankfully you can disable it!

Done! Windows preference handling really needs some work. It still can't handle font sizes in any sensible manner, nor does it display unicode characters out of the box.

This is hilarious :) The Power of Lutefisk: 'Lutefisk' is an infamous Norwegian dish composed of fish soaked in lye. Want to know more?

If you're going to sit in your basement pretending to be an elf, you should at least have some friends over to help.

Insomnia - Wikipedia, the free encyclopedia: If an alarm has been set, avoid looking at the clock during the night and cover the display if necessary. This prevents mental calculations of how much sleep has been lost so far and how little sleep can be obtained before the alarm will sound. That's so true. You can end up unable to sleep from the stress of being unable to sleep. Blech. 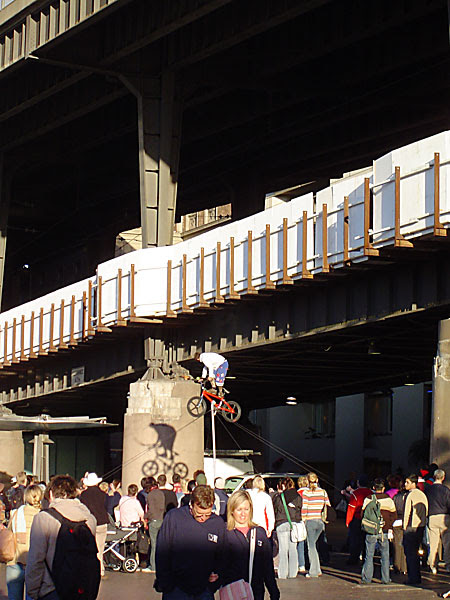 Juggler balancing above the crowd; Sydney Harbour, August 2005. His feet are on the crossbar, not the pedals.

Anyone in Melbourne have a good home for a ginger cat? drjon: Okay, we're looking for a home for Big Red.

I've been going through various draft posts I haven't had time time to publish over the last couple of weeks. I threw away some draft posts screaming about the new anti-terrorism laws, particularly the ones I wrote before the laws were passed.

All I can think of now is the reaction of the cabbie who took me to the airport a few days ago (muslim, bearded, fits-a-profile). He hadn't heard about it yet and when I mentioned it he immediately said 'I better tell my girlfriend if I don't come home, she should call the police and check...' and wasn't really joking. He was a really nice guy, very passionate about his religion and terribly sad that people think it's a violent religion. He said it promotes peace, that extremists 'aren't muslims and don't represent islam'. He then helped me get my bags out of the boot at the airport and bid me a good day.

I keep thinking about him when the new laws are mentioned. What could he do if somebody decided he might be a risk? He'd be detained, maybe put under house arrest for months on end for absolutely no reason and nobody would ever know about it. Maybe he'd be allowed to tell his family. Maybe.

I mean, sure, so he could be a terrorist. But then I could be a bank robber in my spare time. My next door neighbour could be a disguised alien being beamed over from Mars. Personally I thought we lived in a country where "could" and "might" weren't good enough to lock people up.

At least, that's how it was when I was growing up. I guess it's a different nation now. 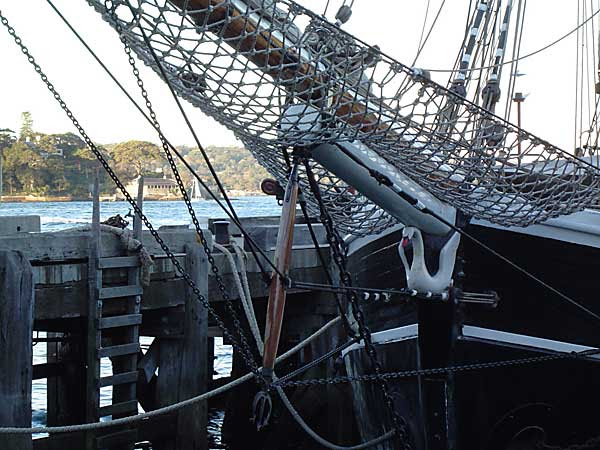 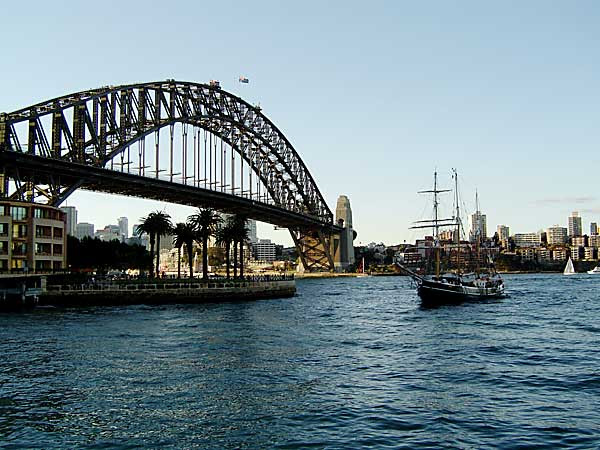 Since I haven't actually posted a non-detail shot... here she is returning to dock after a cruise :)

Any Bloggers out there? Do me a favour and head over to Blogger Help | Wishlist and vote for categorisation :)

WE05 was awesome. Expect more details and a serious blogroll extension over at the 200ok weblog.