I only just found out. Articulate: Australia mourns Margaret Scott. August 29, 2005. ABC News (Australian Broadcasting Corp). I remember Margaret Scott for her hilarious appearances on Good News Week and the World Series Debates. I think she would have liked having an episode of The Glass House dedicated to her.

I realise my take on haiku isn't really true to the concept. I adhere to the structure, but put too many ideas into each one. Most of the time, I should write three haiku for every one I write down. Basically take each line and expand on the one thought it came from.

I also realise - with some surprise - that although it will probably take decades for me to start writing good haiku, that thought doesn't bother me.

Forthcoming gigs from the Tychsters! Check it out... Tycho Brahe page has all the info including online ticket sales for the VNV Nation gig. Also has full-size copies of the posters.

On the plus side, when you get to see the Sydney Harbour Bridge you discover you have to see it to truly get your head around the sheer size of that sucker! I've taken a ton of photos of the bridge and to be honest I think I could take a ton more since really I've only covered the obvious viewpoints so far. Plus I need a wide angle lense :)

Note: I edited this on an old laptop, so I can only hope the pics are viewable at your end... :)

Wynyard Station, or at least the dome on the top of it. There's an entire shopping centre down there. Bugger room service, Coles is open until midnight and I can practically see it from my hotel room window. $3 for a tiny bottle of spring water? Not fucking likely!

Note: I edited this on an old laptop, so I can only hope the pics are viewable at your end... :)

Well, to be fair I've also learned some stuff about PeopleSoft... and not just the fact that the admin interface is even worse than the user interface, either :) The product's interface suffers mightily from growing out of a Windows client solution. I'd guess that the port to a web app was not done by people with a primary skillset in web development.

Note that I am fully aware that while the problems with the interface are many and varied, this does not reflect what the backend does or can do. So don't get up in arms if you're a PS developer, you can PeopleCode to your PeopleHeart's content. Just don't believe PeopleSoft/Oracle's documentation which claims the Portal "works in any HTML 4 browser", because that's crap.

Sydney Harbour Bridge as it looked earlier this evening.

BTW, any LJ photographers out there who actually like constructive criticism... give bestshot a go.

Cute Overdose or Stoned Cat? You decide... [copy and paste the URL in a fresh window to get around the hotlink protection]

The more I look at Le blog personnel de Joe Clark | How very hard indeed it is to defend Opera, the more I just feel like pointing at my previous post about Macs: i think i've solved the mystery. [Sidenote: Of course, I don't know the guy well enough to know how much is real and how much is ironic humour. So, we'll have to go with the post at face value I guess.]

Clark's post isn't really about Opera, it's about rabid fanboys and how macheads are the alpha beings of earth. His rage at the people who have emailed him sounds a bit like my rage at the macheads who have emailed me (or my team) at work. Apparently he's discovered what macheads look like to non-macheads (although I doubt he'd put it that way :)). That is, Macheads lead with righteous indignation and an impervious shield of belief. Emotion wins out over objectivity, which is not a recipe for success if you're trying to win someone over. Sounds like that's the approach being taken by Opera fans.

I am definitely an Opera fanboy, although I would hope I'm a tad more rational than the rabid types sending hatemail to Joe Clark. For a start I can accept that he's talking about the Mac version, not the PC version. So you can't respond based on using the PC version. Mind you, Joe Clark might do well to remember that he can be pretty abrasive when he posts.[*]

The underlying issue with Clark's original post (that spawned the hate mail) is that software often doesn't get ported between operating systems very well. Apparently Opera for Mac isn't Mac-y enough, just as iTunes for Windows sucks arse because it's too Mac-y. The two systems have fundamental differences, if you take an application from one to the other you have to localise it properly.

[*] Due to an offline comment I will add the statement that fuck yes I know I can be abrasive too. I never said otherwise :)

My sore throat finally got too much and I went to the doctor this morning (yet I didn't go to the doctor a week ago when I collapsed, go figure). Turns out I have 'swollen tonsil tissue' which is apparently normal and it will just go away on its own. Or not, in which case I have an antibiotics prescription to fill in about three days.

Problem is, that means I just have to wait out the pain. I say pain, this sore throat really is bad. I was trying to tough it out but even the Jack Daniels Cure didn't work (that said, I didn't drink much since I was already on flu tablets). I have what looks like a big angry red pimple on my throat and it hurts like a motherfucker. Apparently Aspro Clear might help, but I really hate taking that stuff and I'm not entirely keen on gargling it (a snarfle would be death). Going to give Strepfen a go, it's some kind of new uber-Strepsil.

But the doctor found a good remedy. While I was there he froze a wart on my finger. I've had this done once before and although it hurt during the procedure it really wasn't too bad. Not this time. Fuck. Ouch. This one is on a fingertip, under the nail. My finger has swollen under the nail. Every time I type an 'n', 'h' or 'y' it fucking kills. Watch me suffer for my art ;)

My sore throat hasn't seemed quite so bad since then, though.

Interesting fact: the doctor said about 80% of sore throats are viral, which means 80% of the time anti-bacterial throat lozenges do shit all.

I've got science for any occasion - (no subject): The Memphis Police Department, on the authority of Homeland Security, put me in the back of a patrol car and seized my camera today.

American readers can feel free to correct me, but it seems the Patriot Act really did remove any last shred of personal rights anyone ever had in the US of A. I have friends in the US I'd like to visit, but I'm starting to think I'd end up taking a photo of something and get thrown in jail without a trial. 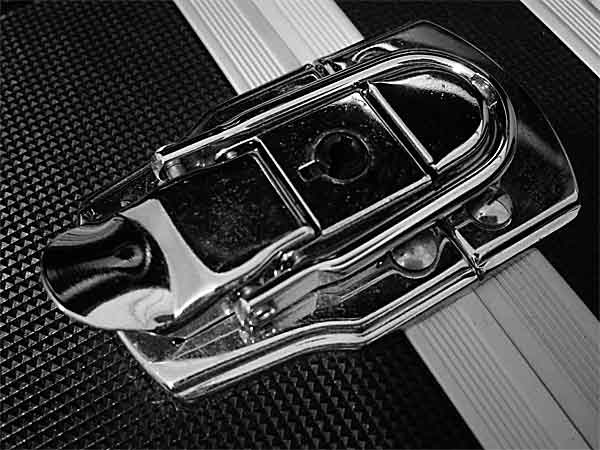 clasp on my dj box.

in other news, i feel sick as hell. damnit. but quote of the day goes to L while refusing to let me go to work: "your voice when you woke up could have been used to make a driveway".

At least my contact with the upstairs neighbours went well... we've been hearing a dripping tap for a while now. Finally caught them at home and in one very short conversation all is well. Maybe I'll finally get to sleep!

[I resisted the urge to do a multiple-keystrike 'asleep on keyboard' joke.]

How to Store Coffee.

The Lyttle Lytton Contest gathers first lines from imaginary books. The goal is to write one sentence which is so incredibly bad the book would have to be atrocious.

Mentioned this earlier but it is now a reality: Apple has actually released a multi-button mouse: Apple - Mighty Mouse. With a mighty effort, they have finally caught up with the Microsoft mouse range (optical, five buttons, scroll and left/right motion). Plus Apple hype, of course; and it's white.

I do find it strange that Microsoft's keyboard and mouse range is actually pretty good. 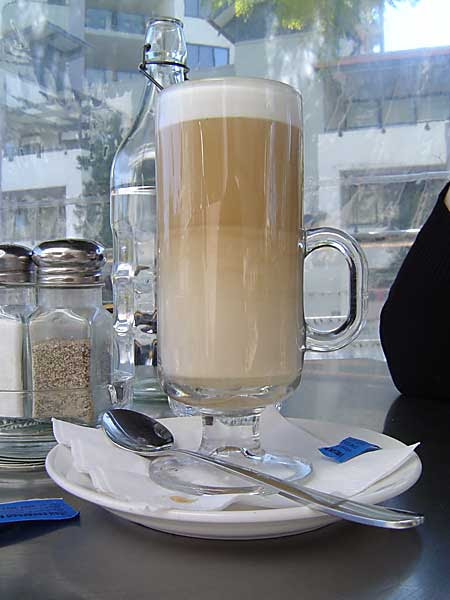 layered latte, from the regatta of all places. we had to get out of our unit early on a saturday morning to let our landlord work on the kitchen, so we did the honourable thing and went out for breakfast ;)

pity i wasn't awake enough to frame it without a truncated elbow. might have been an ok shot otherwise :)

I've dealt with several computer hardware retailers recently. Thought I'd post a roundup of my experiences. First off, what I bought:

So the short version... Umart are still difficult about returns, but not as bad as last time. They probably only do an immediate swap if you physically return the item within about two days, and it has smoke coming out of it. Their prices are still the best but I probably won't be buying from them again any time soon - it is just too big a pain in the arse if anything goes wrong. CoolPC and PC Supermarket were great, but I barely bought anything from them. Still, they get full marks. AusPC Market were great, although their tech support staff are just slightly argumentative they do at least aim to get your gear working as a first solution. They score big time for the USB extension cable. Not full marks, but I'll buy from them again.

I dream of a local computer shop with great prices and at least tolerable customer service.