The Cyberhand bionic hand feels and flexes - Engadget - www.engadget.com. Awesome! Of course, they now face the minor detail of attaching it to a human... details, details :)

That One Guy is playing at The Troubadour this Saturday. Anyone else going? :)

America, United States, Times Online, The Times, Sunday Times: PRODUCTION on two new Pirates of the Caribbean films, starring Keira Knightley, has been halted because of raids by real-life brigands, according to reports from the Bahamas.

They'll probably correct this soon, but for now.... Student guilty of plotting to kill Bush - World - theage.com.au: Prosecutors said he had confessed to his Saudi jailers that he joined an al-Qaeda cell there and was determined to kill Mr Bush by shooting him or blowing him.

Actually a very serious story if you put the missing "up" back in.

Toilet paper now in basic black - The Other Side - Breaking News 24/7 - NEWS.com.au. Yes indeed! If you're so goth you shit bats, this is the toilet paper for you...

I'm still chortling at the mental image of Alexander Downer stuck in a revolving door, from the previous post. If I'd had a shred of respect for Downer in the first place, it'd be dead and buried now. Moot point, though.

The Australian: Foot-in-mouth Vanstone 'must resign' [November 21, 2005]: Senator Vanstone said: 'I asked him if I was able to get on a plane with an HB pencil, which you are able to, and I further asked him if I went down and came and grabbed him by the front of the head and stabbed the HB pencil into your eyeball and wiggled it around down to your brain area, do you think you'd be focusing? He's thinking, she's gone mad again.'

I think we've all realised that you can kill someone with a broken glass, bottle or even a pencil... but I don't recall thinking it through to the 'wiggling it about in the brain' level of detail. Plus it's slightly worrying that perhaps she thinks the rest of us don't realise that most of the security measures are there for appearances only, not effectiveness.

I send out an email to our user group. They have to start using sFTP instead of FTP. That's the whole thing. For most of them, that means installing a new FTP client - which actually means they just log a job and it's done for them.

My email clearly links to a tutorial covering the specific process (spoonfeeding all the config details etc). Plus it clearly states that if you need further help after the turorial, to log a help request via the usual channels (URL clearly included).

Within a couple of minutes of sending the email, I get a one-liner reply saying "I want some help with this"... too soon for them to have actually read the tutorial.

Email needs a new feature. I want to be able to set an email so that if the user hits 'Reply' within 30 seconds they get a small but uncomfortable shock. 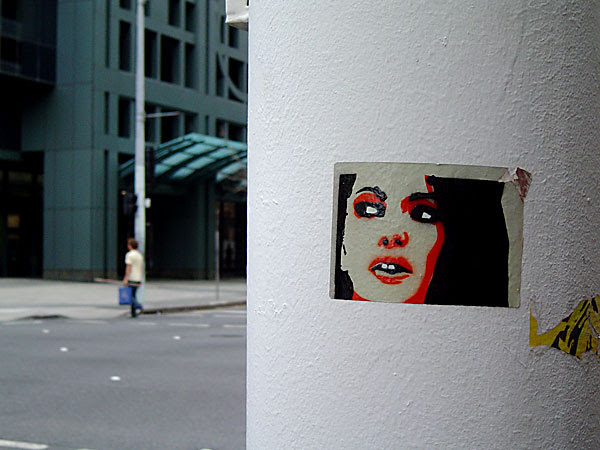 Where else can you work out in a few short clicks that someone is sending you Portuguese profanity, with no prior knowledge of the language?

The net. It brings people together...

Blogged by Relapse, this was yesterday at work:

<indignant>"Don't steal my snake! I was using it to think, I need something in my hands."

"Stop playing with my snake!</indignant>

EDIT: One last one (probably on purpose) for "the peanut gallery."

"That's it, I'm taking my snake and going home." 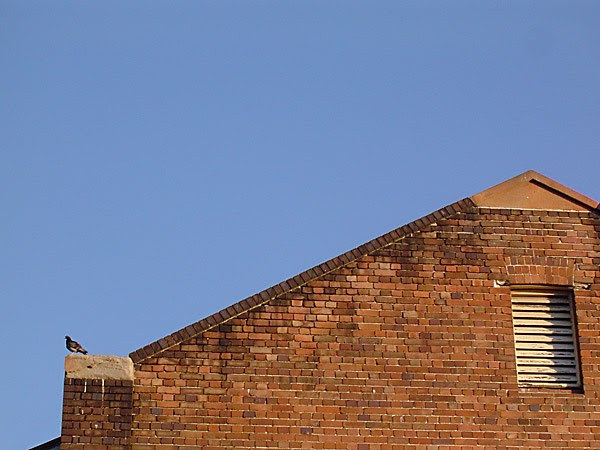 Roofline at Ultimo TAFE (with pigeon :)).

I'm studying for an exam on information modelling. This basically means I'm learning relational calculus. So far I've learned that I really hate calculus. Anyone who does this shit for fun is definitely wired differently to me: Summation by parts - Wikipedia, the free encyclopedia. I mean look at that stuff. It's line noise! Maths geeks are crazy! :)

What's interesting is that I can often jump right to actual code, but have a lot of trouble writing out the formal theory or pseudocode. To some extent I seem to sub in brute force logic for elegant mathematical proofs and cross-checks.

I tried to explain this to my mum once. She has a maths degree and was telling me how she found parabolic acceleration mathematics fascinating. I can understand the concept no trouble: a ball rolling down a 45° slope will take longer to reach the end than a ball rolling along a curved path to the same end point, even though the curved path is longer. I'm pretty sure I worked out the theory on my own: the curved path lets the ball accelerate to a higher speed, so it reaches the end faster despite the longer distance.

I get the concept. But make me do the maths, run the actual numbers... it's bad. I have a lot of trouble making the numbers work. I also get very bored. In high school I actually had occasions where I knew the correct answer but couldn't get the equations to work.

But anyway, that won't help on the exam, so back to the books I go...

Lee loses ball, but finds runs - Top stories - Breaking News 24/7 - NEWS.com.au. CRICKET superstar Brett Lee hit the ball so far out of the ground it was declared lost. ...when I was a kid, lost ball was Six And Out! :)

The single letter that may save thousands of lives - Top stories - Breaking News 24/7 - NEWS.com.au... the article pushes the idea that the changes will save lives, that they are 'not controversial' and really don't matter. The only hint of dissent is then watered down by quoting an Independent Parliament member. It's like the media can't raise the energy to be outraged any more. This is about as close as it gets:

[The changes have] two significant political consequences. One is that news of the suspected and immediate terror threat swamped Labor criticisms of the proposed industrial relations laws.

By declaring there was a potential, imminent strike, it also added pressure on those opposing the broader range of anti-terror laws being reviewed by the states.

But that's well down the page. The article leads with: The fight against terrorism is so finely balanced that the saving of lives can come down to the choice between a definite or an indefinite article.

...no, no it fucking doesn't. If the police have found a terrorist cell with intent to carry out an act of terrorism, to be sure of it they must have some form of evidence. Without evidence, you have no case except "they look funny". The laws are being changed so that anyone can be accused of terrorism without any form of proof, with no legal recourse and no access to family, support or even the media (the last line of defence when the law fails).

You do not need a police state to prevent terrorism. You do need a well funded police force with the ability to actually track down terrorist activity in the first place. Stuffing around with "a" and "the" ignores the fact that people planning to bomb a/the target HAVE A FRICKING BOMB which is illegal. They probably have GUNS, which are probably unreigstered and illegal (if they are registered, then registration is too easy and those laws need changing). They are likely to have committed a range of offences before the fact, all of which are sufficient to detain people under current laws.

Howard is just using terror tactics on the population to keep us from complaining. He will never have to produce any kind of proof that a terrorist threat exists right now, meanwhile he can score all the political points he wants.

The media will pass on the party line.

I have to mention Bill Bailey "Part Troll" DVD. Quite possibly the funniest and definitely the best-produced comedy show I've ever seen. It has the rhythm and delivery of a rock concert as Bill Bailey makes use of every inch of the stage, every bit of lighting, sound gear, projected video, musical instruments... the lot.

The DVD is making its way around the office at the moment and half the show has joined our in-joke stock.

Billy Connolly has probably made me laugh just a little harder (but then the Big Yin will probably always be my favourite :)), Robin Williams Live On Broadway came close but lost by a shade. This DVD is damn funny.

Goths not to blame for teen's suicide: friend - National - smh.com.au

A schoolmate of a teenager who died in an apparent ritual double suicide has rejected the allegation that an interest in Goth subculture contributed to the girl's death.

The 15-year-old had run away from home in September 2004 after clashing with her stepmother and truanting. Within three weeks of meeting her 23-year-old boyfriend, the two of them were found dead.

She ran away from home after family troubles, shacked up with a guy 8 years older than her and in three weeks later is found dead. But it was her clothes that did it.

Their bodies and faces were marked with symbols, and they were dressed in Goth black.

Ahhh, Goth Black, blacker than any other kind of black. It's blacker than normal black and makes you kill yourself.

She said when she and another friend arranged to take a trusted teacher to meet the girl, six days before her death, she looked "absolutely horrible", and appeared stoned.

But the drugs had nothing to do with it of course. It was the clothes! She didn't self-harm because she was depressed, no it was because of the music!

'Specific' terror threat against Australia: PM - National - smh.com.au: Australian intelligence authorities have received specific information about a terrorist threat in Australia, Prime Minister John Howard says. As a result, an amendment to Australia's anti-terror laws making it easier to prosecute people thought to be planning a terrorist attack has been rushed into parliament today. I think the worst thing is Howard really seems to think nobody sees through this pathetically obvious ploy.

I can see little Johnny now: "Terrorists are throwing children overboard! Quick! Let us shoot people we don't like the look of! Your civil liberties are my toilet paper! You voted my part into both houses, you are now my bitches BWAHAHAHAHAHAH!!!!" 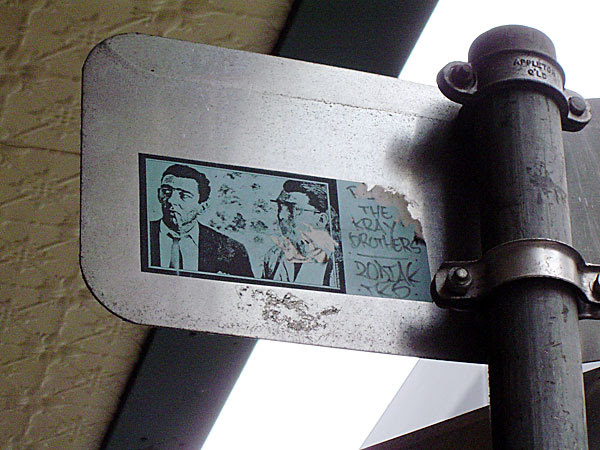