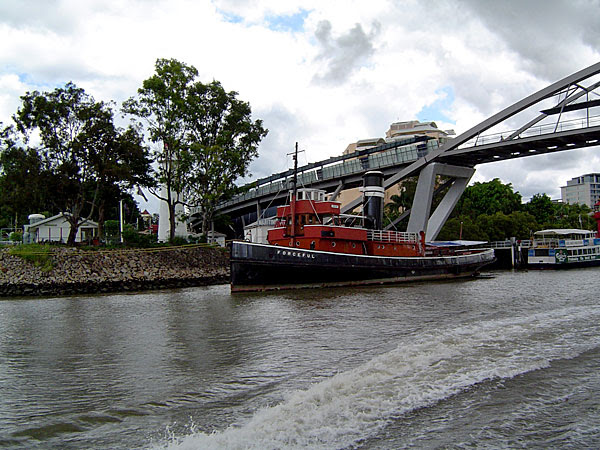 Steam tug SS Forceful, at the Queensland Maritime Museum. To the best of my knowledge, she still steams regularly.

Someone claimed some instructions were incomplete, our frontline staff made the mistake of taking their word for it. I took their word for it as well, only to discover that the extra details are in the documentation and have been for a couple of years (since I wrote it). I let our staff know, and get this reply...

so what your telling me, was that she just wasted my time, because she couldnt read the whole document.

then i wasted your time by not reading it either.

Sometimes you have to laugh, because crying at work gets funny looks ;)

Ahh well. I'm on a project now anyway, so I shouldn't see this sort of thing any more. On the flip side, the project office smells like rotting carpet. Balance is maintained.

Today I slept in, made some average coffee on our new espresso machine*, stuffed around with an iPod and watched a bit of tv. I didn't get shot at, power remained on the whole time (and hence our aircon stayed on) and my comfortable life wasn't disturbed.

Yep, despite the best efforts of our nation's leader, this is still a pretty fucking good place to live.

I don't care if you ate lamb or not (it's not a tradition; it's an advertising campaign, people...) but I hope you spared a thought for the reason we had a day off.

* Average coffee? Yeah, I'm gritting my teeth and admitting I wasn't born with the skill to create perfect coffee ;) 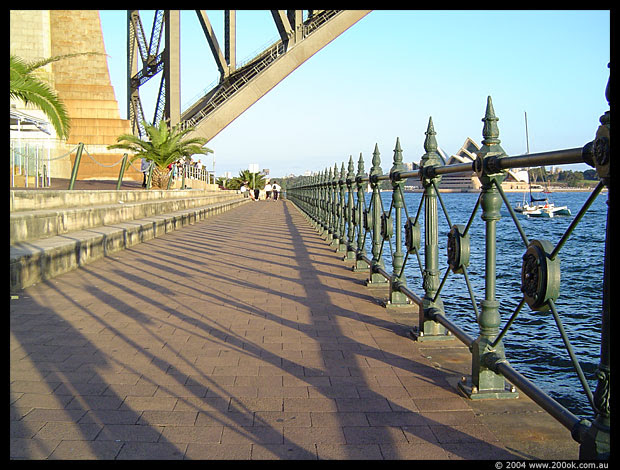 I remember dinner at Betty's Soup Kitchen, getting half lost on the way to the gig, crashing into horrible fatigue and only making it through the night on the sheer joy of the gig. I remember chatting through the lift home that night (via the Anzac Bridge) courtesy of the ever-wonderful rocksluts.

I remember the Harbour Bridge really making its impression on me the next day, amazing me that it really doesn't look like the postcards (although the Opera House really does). Took scores of average photos, a few good ones. We'd bought our cameras just days before the trip, deciding we'd be damned if we flew interstate and didn't have digital cameras :)

Once again, The Washington Post has published the winning submissions to its yearly contest, in which readers are asked to supply alternate meanings for common words. The winners are: 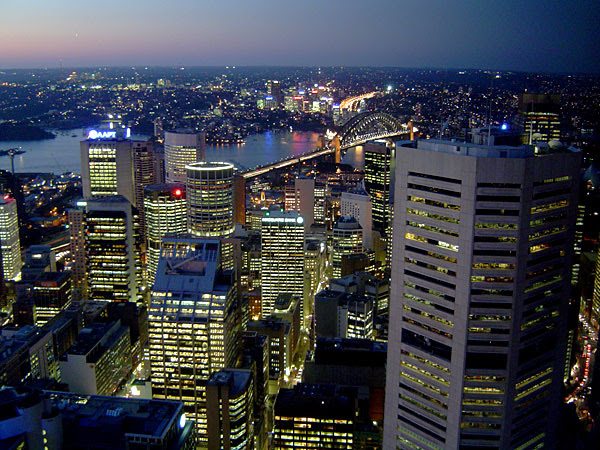 Sydney night skyline, from the Centrepoint tower. August 2005. From memory the window glass was curved, which increased the barrel distortion. Still a nice looking shot though :)

Wilson Pickett dead at 64 - Midnight Hour - Breaking News 24/7 - NEWS.com.au: VETERAN soul singer Wilson Pickett, known for such hits as Mustang Sally and In the Midnight Hour, has died of a heart attack near his home in Virginia. He was 64.

It's the truth. You know it. Every OS Sucks: Every computer crashes, becuase every OS sucks!. Yes, including MacOS. Yes, inluding Linux. Yes, obviously, including Windows.

Stuff On My Cat. Includes some that just beg for captions: "Eventually you must sleep. Then, human, you die.". Some are mostly impressive in that the cat didn't move... Stuff On My Cat | Oscar has skillZ with a capital Z.

Australian IT - Backlash over blog block (Correspondents in Beijing, JANUARY 09, 2006): MICROSOFT is under fire for blocking a prominent Chinese blogger, joining a growing list of US companies helping Beijing curtail free speech. ... US giant Google has also been accused of censoring its Chinese language search engine, while Cisco Systems and other firms have been accused of helping set up what has come to be known as the 'Great Firewall of China,' one of the world's most advanced systems of censoring information on the internet.

...with a side order of back up your blog! If you don't have direct access to the server, something like HTTrack can at least grab a copy.

retrievr - search by sketch. search by colour too, essentially. but it does recognise basic shapes/forms.